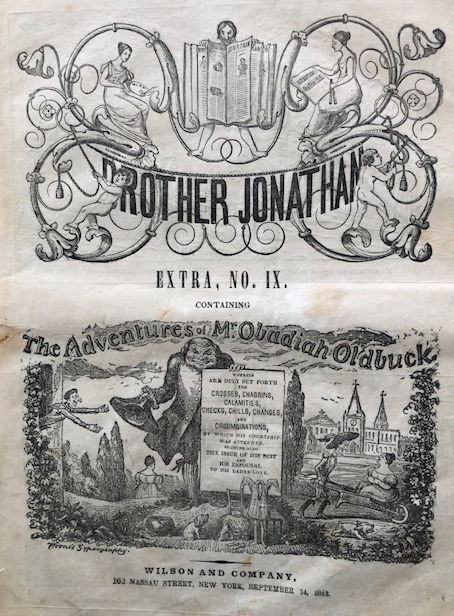 Töpfferiana opens its pages to David Kunzle1 who appeals to the Topfferian community to help him:

In 2005 I received a lavish gift from my dear friend Marianne Gourary of New York, a couple of years before she died, her incomparable collection of early Töpffer editions. One item stood out for the price/value given on an (older) AbeBooks site as $34,500, more than three times the top price (for a Voyage) according to current selling prices in AbeBooks. This price was given and offer for sale was made through the AbeBooks site, according to a printout I have, from a date I cannot determine, and the name of the vendor dealer was given as Folio Fine Books, in Toronto, who have not replied to my request for information. I now circulate the enquiry for any additional information regarding the sale to the Töpffer community of Töpfferiana. The printout included an extensive history and description of the item as « the Holy Grail of American Comic Books collectors » with the claim that it was one of only twelve copies known to exist. The Gourary archive included related letters accompanied by articles detailing ownership and reader enquiries from the New York press dating back to 1904, when the work (not necessarily my copy) was arousing special interest. Marianne died before I got into her archive to ask her the question: where did she get her copy, and how much did she pay? Much or most of her collection included documentation about provenance and price she paid, but not this. Her daughter tells me it is very unlikely she paid this much for a single item.

The work as advertised by AbeBooks corresponds with what I have, which is elegantly enclosed in a mini case of blue protective cardboard flaps (pseudo-box), added by someone who valued this Töpffer edition. It is not a book or an album in the form I have it, but 40 loose pages of cheap newsprint. The title page reads Brother Jonathan Extra N. IX. This journal survived on cheap plagiaries of popular fiction, like so much cheap journalism in an age when the U.S. did not (as Charles Dickens bitterly complained) respect copyright. Below the journal title there appears title The Adventures of Obadiah Oldbuck and long subtitle surrounded by figures from the story, above a publishing line Wilson and Company and the date September 14, 1842. This credits the Brother Jonathan source of the copy: The Gourary donation includes this version, together with another, simultaneous (?) copy by the New York publisher Dick and Fitzgerald. Both relied on an English source, Tilt and Bogue, who did other Töpffer plagiaries/copies, and specialized in light illustrated literature. This English version evidently derives (is precisely traced) from a French plagiary of Töpffer’s original autographic Les Amours de M. Vieux Bois, first edition of 1837, not the second, much revised edition of that year, dated 1839, second edition of the album, designed to counter the French plagiary, which annoyed the author exceedingly.

It is very likely that Töpffer was spared sight of this fourth generation plagiary/copy. The unique circumstance of a fourth copy, from a country which had generally spared the Swiss author such treatment, and its apparent scarcity (a scarcity even in the 19th century is evident from earlier correspondence mentioned), warrants this appeal to the Töpffer world.